Cigarette boats are high-performance watercraft that are famous among boating experts and have been collected by a variety of enthusiasts, celebrities, and public figures. Nevertheless, inexperienced sailors may find themselves wondering what a cigarette boat is. If you’re asking the same thing, don’t worry; this article will tell you!

In this article, aside from answering the question, “What is a cigarette boat?” we will explain the secret behind the oddity of cigarette boat names and provide certain knowledge about cigarette boat history. Rest assured that you will have a better understanding of these uncanny vessels. Continue reading to learn more!

The Story Behind the Bizarre Name of Cigarette Boats

I am sure that when you first heard the name “cigarette boat”, you immediately questioned “Why is it called a cigarette boat?”. To get an answer, you may have come up with the idea of a boat specialized for transporting cigars or something of sorts. But in reality, it has nothing to do with this illegal activity, at least before the boat became popular.

Back in the 20s and 30s, during the prohibition era, despite the ban of alcohol and illegal stimulations, many Americans managed to transport alcohol like rum or whiskey from big ships, then smuggled them into the mainland using cigarette boats, which at that moment were called “rum-runners”.

The secret behind the name “cigarette boat” lies in the life of legendary boat builder Don Aronow and his infamous team: Cigarette Racing Team. In the early 1960s, Dan Aronow designed his first-ever racing vessel in an uncanny hull structure and named it The Cigarette, as it resembled a cigarette. He then competed in the United States Championship and came in first, as well as won the UIM Gold Medal of Honor.

Following the unexpected success, Aronow opened his own company and started the Cigarette Racing Team. Eventually, thanks to the special design and speed, Aronow’s team and their cigarette power boats had won hundreds of races. Over 350 titles and world championships have been conquered by his boats.

Since then, the design of cigarette boats has influenced other watercraft manufacturers. Surprisingly, this kind of boat was also preferred by smugglers to transport items, such as tobacco, whiskey, and even narcotics in the 1980s.

The glorious history of cigarette boats is still remarkable today. Although the tragic death of Dan Aronow ended the era of these amazing boats, it had also increased the consumption of vessels as a way to remember Aronow’s legacy.

An Introduction of the Cigarette Boat 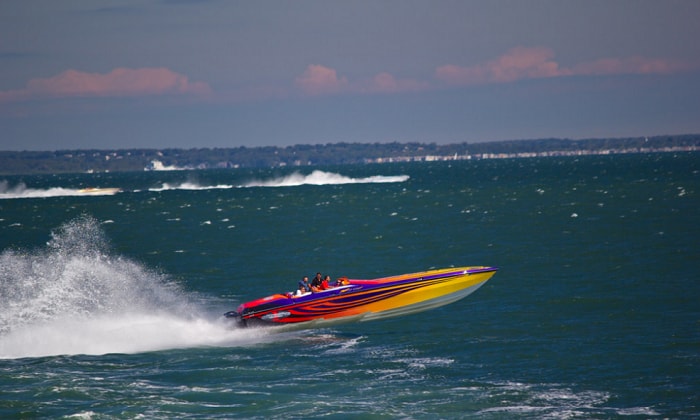 After finding out about cigarette boats, you may be curious about their shapes and specifications. Let us give you a proper description of these types of boats.

Cigarette boats, often known as go-fast boats, are slim and fashionable performance vessels. With a thin body ranging somewhere from 20 to approximately 50 feet long and a v-shaped hull that enables the boat to chop across even the most tumultuous seas, these water machines attain speeds of more than 150 knots during calm seas and more than 50 knots to 57 miles an hour in stormy waters.

Due to its structure and designs, a cigarette speed boat is a significant example for racing speed boats. They eventually got so popular that the distinction between cigar boat vs cigarette boat grew irrelevant; everyone knew which kind of vessel it was.

Cigarette boats are interesting yet complicated types of boats. Still, if you are a speed lover and a high-performance vessel enthusiast, these crafts will definitely suit your taste and are worth learning about.

Hence, we hope that the above information will help you and your fellow sailors control cigarette boats more effectively so that cruising experiences with family and friends will be amazing!

Did you enjoy the article on what is a cigarette boat? Do you want to add anything else? Please let me know and leave a comment below.